The Jerusalem College of Technology (JCT), an Orthodox Jewish college, is making waves in Israel’s male-dominated hi-tech industry. Specifically, Machon Tal (The Tal Institute), JCT’s Women’s Institute of Engineering, is helping women from the full gamut of Israeli society to earn degrees that will propel them into top positions in engineering, computer science and biotech fields. Particularly impressive is JCT’s focus on Ethiopian and charedi women. “Charedi women are vibrant and energetic,” says Aurora Cassirer, Board Member of Friends of JCT and former president, and Member of the International Board of Directors for Machon Lev/JCT in Israel. “Even the cab drivers in Jerusalem know that,” she adds with a smile in her voice. “There’s a demand for qualified people. By giving these women the opportunity to earn degrees in fields such as engineering, business, security, and nursing, we can change the social face of Jerusalem.” At a time when the Israeli government has cut back on funding, many charedi women, who are often the main breadwinners in the home, are welcoming the opportunity to move into fields in which they will more easily be able to provide for their families. “Positions in hi-tech mean that these families will be able to purchase an apartment,” says Ms. Cassirer. An attorney at Troutman and Sanders in Teaneck, New Jersey, Ms. Cassirer is pivotal in raising awareness and financial support for JCT. “My parents were Vishnitz chassidim in Romania. They survived Nazi terror and then, when the Iron Curtain fell, they remained stuck behind with the Communist regime. They learned that only an education is portable. I was ten years old when we arrived in America. My two sisters and I were raised to become educated,” says Ms. Cassirer. It’s a credo she works to impart to others.

Machon Tal, founded in 1999, is the main women’s division of JCT and boasts more female engineering students than any other engineering school in the country. It is also the only religious school in Israel to offer an academic degree in nursing. Over 320 students from Israel and around the world are enrolled and a new olimdepartment caters to the large number of new immigrants. All students integrate Jewish studies into their regular academic studies. A visit to Machon Tal showcases the results of Ms. Cassirer’s parlor meetings: “I saw two to three dozen women seriously studying at their computers. There was little conversation, but the atmosphere wasn’t competitive; it was co-operative.”

Naomi, twenty-one years old, enrolled this year in a preparatory course that helps Bais Yaakov graduates complete the requirements for nursing school. “Nursing wasn’t on my radar screen as a career option,” she says. “But when I began taking care of a baby boy born with renal failure, I realized nursing was something I could do.” Machon Tal’s preparatory courses, including basic chemistry and computers, are the first step towards Naomi’s career.

And what are the overall results of Machon Tal? Ninety percent of JCT’s female graduates are employed. 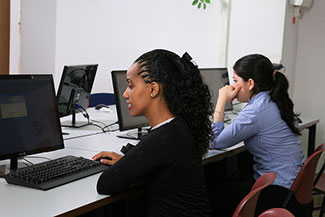 Machon Lustig, an additional campus in Ramat Gan, gives charedi women a chance to study for a degree in computer engineering, computer science, managerial accounting and information systems.Integrating Torah studies with high-level secular academics in an environment that does not compromise the principles of their ultra-Orthodox upbringing allows traditional Bais Yaakov graduates to acquire the educational tools necessary for employment in sophisticated fields. For those seeking more traditional forms of employment, the additional option of teaching certification is offered.

Dr. Hadas Tischler, who graduated with a BA from Machon Lustig and went on to complete her doctorate in neuroscience in Bar Ilan University, now teaches math and science at Machon Lustig. “The government is using financial incentives to motivate institutes to open courses geared to charedim,” she says. “Charedi women are reliable workers who enter positions to work, not to socialize. During my two years working at a bank, the secular manager asked us to encourage more charedi women to approach the bank for employment.” Dr. Tischler recalls that in one of his lectures, Rabbi Zvi Ilani, dean of Machon Lustig, cited the example of a young woman who asked her boss for permission to call her husband once a day from work. “There are halachot to take into account. A worker is paid to work; she can’t squander time and money that belong to her boss.” Asked how a charedi woman, who typically has a large family, can successfully balance family demands and a hi-tech job, Dr. Tischler is quick to point out the advantages. “Many women start work at 6.30 a.m. and are back to pick up their children from daycare at 2.00 p.m – long before other mothers get there. In addition, after working for a number of years, women often find that companies let them cut back on the long hours.” Then Dr. Tischler adds the clincher: “A woman who knows that her family is financially stable is a happy, relaxed mother,” she says.

JCT was the first of Israel’s leading institutions of higher education to take up the challenge of helping students from the Ethiopian community obtain degrees in the fields of science and engineering. The program includes Ethiopian women who study at JCT’s Women’s School of Engineering in Machon Tal. 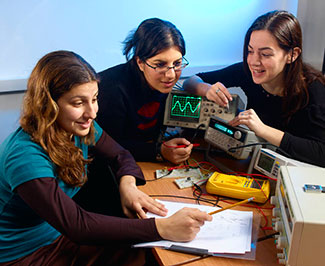 Rachel Agmas, 26, originally from a small village on the outskirts of Gonder, north-west Ethiopia, is one of over 300 students studying nursing. The course is challenging – it’s not for nothing that the first two groups of graduates achieved the highest average score of any Israeli nursing school in the National Nursing exams – but Rachel has the mettle to succeed. “Before beginning my studies, I spent three years in the army, graduating as an officer. My work included integrating new immigrants and, later, conducting programs for other officers to raise awareness and understanding of the many different cultures that make up Israeli society,” says Rachel. She points out, interestingly, that the anthropologists who came to lecture on Ethiopian culture gave her a window into values and traditions she had chosen to push to the side in her determination to fit into Israeli culture. “I’m naturally shy, but my responsibilities in the army gave me the self-confidence to believe I can succeed in nursing school,” she says. Rachel was attracted to Machon Tal not only because of the high academic standards, but also because she wanted to deepen her Jewish studies. “I was always committed to tradition, but these studies have brought me to a different level,” she says.

Rachel is quick to point out that Machon Tal offers much more than just studies. As well as helping eligible students organize the grants they need to finance their studies, the school works to inculcate a love of the land of Israel and ensure social bonding. “Machon Tal cares for us,” says Rachel. “On a beautiful trip to the north of Israel, we had a chance to relax and bond together as a group.” In addition, a special evening was held to mark Sigd (a festival celebrated by Ethiopian Jews fifty days after Yom Kippur in which the community rejoices at the renewal of the alliance between the people, God, and His Torah). “We’re not just in a university here,” says Rachel. “The staff has a personal connection with the students.”

Thanks to this and other programs, JCT is building a community of hi-tech scientists and engineers and transforming the image of Ethiopian immigrants throughout Israel. To date, over 250 students have entered the program and 96 students have graduated and gone on to work as officers in the Israeli army, electronic engineers, accountants, communications specialists, and other positions.

JCT at A Glance 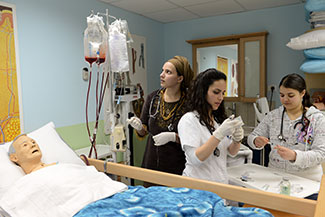 JCT, founded in 1969 by ProfessorZeev Lev (William Low), offers bachelor’s and master’s degrees, fully accredited by the Council for Higher Education in Israel (the main authority overseeing Israel’s academic institutions), in programs including electro-optics, high-tech engineering, industrial management and lifeand health sciences. Unlike other educational institutions in Israel, JCT comprises several schools, each catering to a different demographic group by offering educational programs tailored to the specific needs of that group. Five separate campuses offer programs customized to meet the individualized needs of the Ethiopian community, the chareidi community, the English speaking community, and students currently serving in the Israel Defense Force. JCT’s plethora of degrees, coupled with its programs of Jewish studies, make it possible for students from observant backgrounds to obtain an academic degree while continuing their Jewish studies. Over 4,000 students are currently enrolled in JCT, with a faculty of over 500 professors, instructors and researchers.

Spread over campuses in the neighborhoods of Givat Mordechai and Givat Shaul in Jerusalem and Ramat Gan, The Jerusalem College of Technology includes the following institutes: